Shift to renewable electricity a win-win at statewide level

Shift to renewable electricity a win-win at statewide level 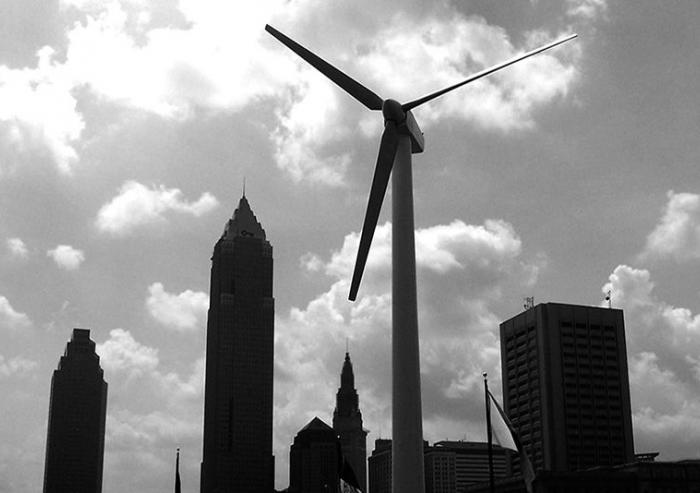 Amid rollbacks of the Clean Power Plan and other environmental regulations at the federal level, several U.S. states, cities, and towns have resolved to take matters into their own hands and implement policies to promote renewable energy and reduce greenhouse gas emissions. One popular approach, now in effect in 29 states and the District of Columbia, is to set Renewable Portfolio Standards (RPS), which require electricity suppliers to source a designated percentage of electricity from available renewable-power generating technologies.

Boosting levels of renewable electric power not only helps mitigate global climate change, but also reduces local air pollution. Quantifying the extent to which this approach improves air quality could help legislators better assess the pros and cons of implementing policies such as RPS. Toward that end, a research team at MIT has developed a new modeling framework that combines economic and air-pollution models to assess the projected subnational impacts of RPS and carbon pricing on air quality and human health, as well as on the economy and on climate change. In a study focused on the U.S. Rust Belt, their assessment showed that the financial benefits associated with air quality improvements from these policies would more than pay for the cost of implementing them. The results appear in the journal Environmental Research Letters.

“This research helps us better understand how clean-energy policies now under consideration at the subnational level might impact local air quality and economic growth,” says the study’s lead author Emil Dimanchev, a senior research associate at MIT’s Center for Energy and Environmental Policy Research, former research assistant at the MIT Joint Program on the Science and Policy of Global Change, and a 2018 graduate of the MIT Technology and Policy Program.

Burning fossil fuels for energy generation results in air pollution in the form of fine particulate matter (PM2.5). Exposure to PM2.5 can lead to adverse health effects that include lung cancer, stroke, and heart attacks. But avoiding those health effects — and the medical bills, lost income, and reduced productivity that comes with them — through the adoption of cleaner energy sources translates into significant cost savings, known as health co-benefits.

In an extension to their published work focused on the state of Ohio, the researchers evaluated the health effects and economy-wide costs of Ohio’s RPS using economic and atmospheric chemistry modeling. According to their best estimates, an average of 50 premature deaths per year will be avoided as a result of Ohio’s RPS in 2030. This translates to an economic benefit of $470 million per year, or 3 cents per kWh of renewable generation supported by the RPS. With costs of the RPS estimated at $300, that translates to an annual net health benefit of $170 million in 2030.

When the Ohio state legislature took up Ohio House Bill No. 6, which proposed to repeal the state’s RPS, Dimanchev shared these results on the Senate floor.

“According to our calculations, the magnitude of the air quality benefits resulting from Ohio’s RPS is substantial and exceeds its economic costs,” he argued. “While the state legislature ultimately weakened the RPS, our research concludes that this will worsen the health of Ohio residents.”

The MIT research team’s results for the Rust Belt are consistent with previous studies, which found that the health co-benefits of climate policy (including RPS and other instruments) tend to exceed policy costs.

“This work shows that there are real, immediate benefits to people’s health in states that take the lead on clean energy,” says MIT Associate Professor Noelle Selin, who led the study and holds a joint appointment in the Department of Earth, Atmospheric and Planetary Sciences and Institute for Data, Systems and Society. “Policymakers should take these impacts into account as they consider modifying these standards.”

The study was supported by the U.S. Environmental Protection Agency’s Air, Climate and Energy Centers Program.