Riddle solved: Why was Roman concrete so durable?

Riddle solved: Why was Roman concrete so durable? 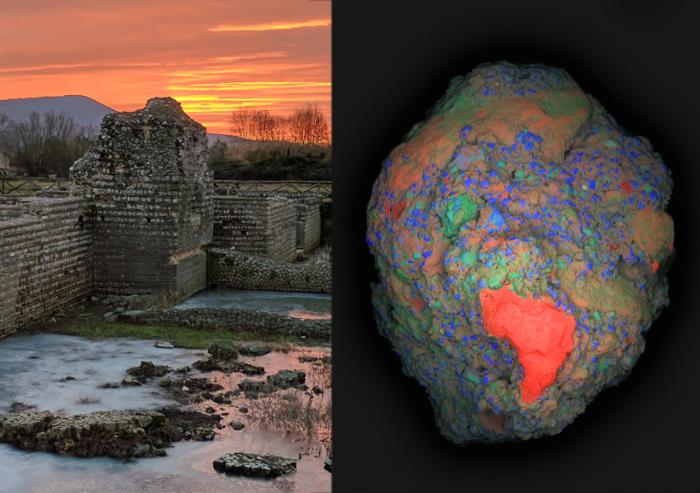 Courtesy of the researchers

The ancient Romans were masters of engineering, constructing vast networks of roads, aqueducts, ports, and massive buildings, whose remains have survived for two millennia. Many of these structures were built with concrete: Rome’s famed Pantheon, which has the world’s largest unreinforced concrete dome and was dedicated in A.D. 128, is still intact, and some ancient Roman aqueducts still deliver water to Rome today. Meanwhile, many modern concrete structures have crumbled after a few decades.

Researchers have spent decades trying to figure out the secret of this ultradurable ancient construction material, particularly in structures that endured especially harsh conditions, such as docks, sewers, and seawalls, or those constructed in seismically active locations.

Now, a team of investigators from MIT, Harvard University, and laboratories in Italy and Switzerland, has made progress in this field, discovering ancient concrete-manufacturing strategies that incorporated several key self-healing functionalities. The findings are published today in the journal Science Advances, in a paper by MIT professor of civil and environmental engineering Admir Masic, former doctoral student Linda Seymour ’14, PhD ’21, and four others.

For many years, researchers have assumed that the key to the ancient concrete’s durability was based on one ingredient: pozzolanic material such as volcanic ash from the area of Pozzuoli, on the Bay of Naples. This specific kind of ash was even shipped all across the vast Roman empire to be used in construction, and was described as a key ingredient for concrete in accounts by architects and historians at the time.

Under closer examination, these ancient samples also contain small, distinctive, millimeter-scale bright white mineral features, which have been long recognized as a ubiquitous component of Roman concretes. These white chunks, often referred to as “lime clasts,” originate from lime, another key component of the ancient concrete mix. “Ever since I first began working with ancient Roman concrete, I’ve always been fascinated by these features,” says Masic. “These are not found in modern concrete formulations, so why are they present in these ancient materials?”

Previously disregarded as merely evidence of sloppy mixing practices, or poor-quality raw materials, the new study suggests that these tiny lime clasts gave the concrete a previously unrecognized self-healing capability. “The idea that the presence of these lime clasts was simply attributed to low quality control always bothered me,” says Masic. “If the Romans put so much effort into making an outstanding construction material, following all of the detailed recipes that had been optimized over the course of many centuries, why would they put so little effort into ensuring the production of a well-mixed final product? There has to be more to this story.”

Upon further characterization of these lime clasts, using high-resolution multiscale imaging and chemical mapping techniques pioneered in Masic’s research lab, the researchers gained new insights into the potential functionality of these lime clasts.

Historically, it had been assumed that when lime was incorporated into Roman concrete, it was first combined with water to form a highly reactive paste-like material, in a process known as slaking. But this process alone could not account for the presence of the lime clasts. Masic wondered: “Was it possible that the Romans might have actually directly used lime in its more reactive form, known as quicklime?”

Studying samples of this ancient concrete, he and his team determined that the white inclusions were, indeed, made out of various forms of calcium carbonate. And spectroscopic examination provided clues that these had been formed at extreme temperatures, as would be expected from the exothermic reaction produced by using quicklime instead of, or in addition to, the slaked lime in the mixture. Hot mixing, the team has now concluded, was actually the key to the super-durable nature.

“The benefits of hot mixing are twofold,” Masic says. “First, when the overall concrete is heated to high temperatures, it allows chemistries that are not possible if you only used slaked lime, producing high-temperature-associated compounds that would not otherwise form. Second, this increased temperature significantly reduces curing and setting times since all the reactions are accelerated, allowing for much faster construction.”

During the hot mixing process, the lime clasts develop a characteristically brittle nanoparticulate architecture, creating an easily fractured and reactive calcium source, which, as the team proposed, could provide a critical self-healing functionality. As soon as tiny cracks start to form within the concrete, they can preferentially travel through the high-surface-area lime clasts. This material can then react with water, creating a calcium-saturated solution, which can recrystallize as calcium carbonate and quickly fill the crack, or react with pozzolanic materials to further strengthen the composite material. These reactions take place spontaneously and therefore automatically heal the cracks before they spread. Previous support for this hypothesis was found through the examination of other Roman concrete samples that exhibited calcite-filled cracks.

To prove that this was indeed the mechanism responsible for the durability of the Roman concrete, the team produced samples of hot-mixed concrete that incorporated both ancient and modern formulations, deliberately cracked them, and then ran water through the cracks. Sure enough: Within two weeks the cracks had completely healed and the water could no longer flow. An identical chunk of concrete made without quicklime never healed, and the water just kept flowing through the sample. As a result of these successful tests, the team is working to commercialize this modified cement material.

Through the extended functional lifespan and the development of lighter-weight concrete forms, he hopes that these efforts could help reduce the environmental impact of cement production, which currently accounts for about 8 percent of global greenhouse gas emissions. Along with other new formulations, such as concrete that can actually absorb carbon dioxide from the air, another current research focus of the Masic lab, these improvements could help to reduce concrete’s global climate impact.

The research team included Janille Maragh at MIT, Paolo Sabatini at DMAT in Italy, Michel Di Tommaso at the Instituto Meccanica dei Materiali in Switzerland, and James Weaver at the Wyss Institute for Biologically Inspired Engineering at Harvard University. The work was carried out with the assistance of the Archeological Museum of Priverno in Italy.