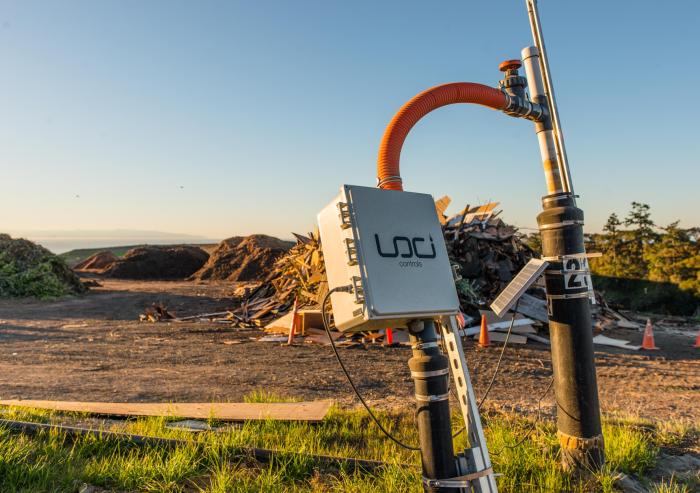 The second-largest driver of global warming is methane, a greenhouse gas 28 times more potent than carbon dioxide. Landfills are a major source of methane, which is created when organic material decomposes underground.

Now a startup that began at MIT is aiming to significantly reduce methane emissions from landfills with a system that requires no extra land, roads, or electric lines to work. The company, Loci Controls, has developed a solar-powered system that optimizes the collection of methane from landfills so more of it can be converted into natural gas.

At the center of Loci’s (pronounced “low-sigh”) system is a lunchbox-sized device that attaches to methane collection wells, which vacuum the methane up to the surface for processing. The optimal vacuum force changes with factors like atmospheric pressure and temperature. Loci’s system monitors those factors and adjusts the vacuum force at each well far more frequently than is possible with field technicians making manual adjustments.

“We expect to reduce methane emissions more than any other company in the world over the next five years,” Loci Controls CEO Peter Quigley ’85 says. The company was founded by Melinda Hale Sims SM ’09, PhD ’13 and Andrew Campanella ’05, SM ’13.

The reason for Quigley’s optimism is the high concentration of landfill methane emissions. Most landfill emissions in the U.S. come from about 1,000 large dumps. Increasing collection of methane at those sites could make a significant dent in the country’s overall emissions.

In one landfill where Loci’s system was installed, for instance, the company says it increased methane sales at an annual rate of 180,000 metric tons of carbon dioxide equivalent. That’s about the same as removing 40,000 cars from the road for a year.

Loci’s system is currently installed on wells in 15 different landfills. Quigley says only about 70 of the 1,000 big landfills in the U.S. sell gas profitably. Most of the others burn the gas. But Loci’s team believes increasing public and regulatory pressure will help expands its potential customer base.

The idea for Loci came from a revelation by Sims’ father, serial entrepreneur Michael Hale SM ’85, PhD ’89. The elder Hale was working in wastewater management when he was contacted by a landfill in New York that wanted help using its excess methane gas.

“He realized if he could help that particular landfill with the problem, it would apply to almost any landfill,” Sims says.

At the time, Sims was pursuing her PhD in mechanical engineering at MIT and minoring in entrepreneurship.

Her father didn’t have time to work on the project, but Sims began exploring technology solutions to improve methane capture at landfills in her business classes. The work was unrelated to her PhD, but her advisor, David Hardt, the Ralph E. and Eloise F. Cross Professor in Manufacturing at MIT, was understanding. (Hardt had also served as PhD advisor for Sim’s father, who was, after all, the person to blame for Sim’s new side project.)

Sims partnered with Andrew Campanella, then a master’s student focused on electrical engineering, and the two went through the delta v summer accelerator program hosted by the Martin Trust Center for MIT Entrepreneurship.

Quigley was retired but serving on multiple visiting committees at MIT when he began mentoring Loci’s founders. He’d spent his career commercializing reinforced plastic through two companies, one in the high-performance sporting goods industry and the other in oil field services.

“What captured my imagination was the emissions-reduction opportunity,” Quigley says.

Methane is generated in landfills when organic waste decomposes. Some landfill operators capture the methane by drilling hundreds of collection wells. The vacuum pressure of those wells needs to be adjusted to maximize the amount of methane collected, but Quigley says technicians can only make those adjustments manually about once a month.

Loci’s devices monitor gas composition, temperature, and environmental factors like barometric pressure to optimize vacuum power every hour. The data the controllers collect is aggregated in an analytics platform for technicians to monitor remotely. That data can also be used to pinpoint well failure events, such as flooding during rain, and otherwise improve operations to increase the amount of methane captured.

“We can adjust the valves automatically, but we also have data that allows on-site operators to identify and remedy problems much more quickly,” Quigley explains.

Methane capture at landfills is becoming more urgent as improvements in detection technologies are revealing discrepancies between methane emission estimates and reality in the industry. A new airborne methane sensor deployed by NASA, for instance, found that California landfills have been leaking methane at rates as much as six times greater than estimates from the U.S. Environmental Protection Agency. The difference has major implications for the Earth’s atmosphere.

For now, Loci’s team, including co-founder and current senior advisor Sims, believes it’s on the road to making a meaningful impact under current market conditions.

“When I was in grad school, the majority of the focus on emissions was on CO2,” Sims says. “I think methane is a really high-impact place to be focused, and I think it’s been underestimated how valuable it could be to apply technology to the industry.”