Partnership of three local organizations could set a sustainability example for others to follow.
David L. Chandler | MIT News Office 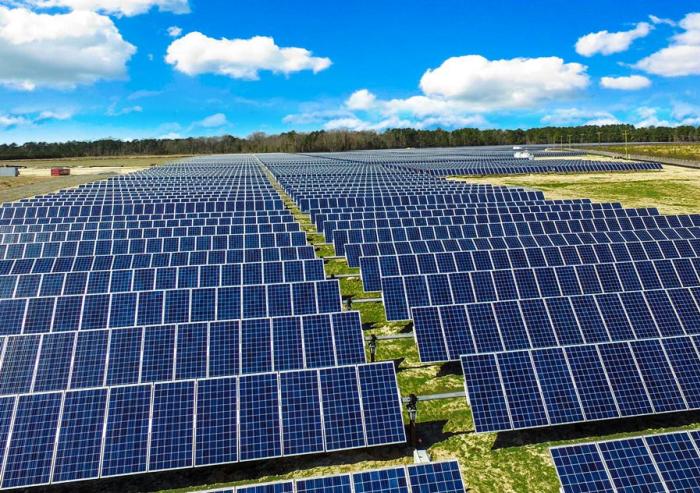 MIT, Boston Medical Center, and Post Office Square Redevelopment Corporation have formed an alliance to buy electricity from a large new solar power installation, adding carbon-free energy to the grid and demonstrating a partnership model for other organizations in climate-change mitigation efforts.

The agreement will enable the construction of a roughly 650-acre, 60-megawatt solar farm on farmland in North Carolina. Called Summit Farms, the facility, the largest renewable-energy project ever built in the U.S. through an alliance of diverse buyers, is expected to be completed and to begin delivering power into the grid by the end of this year.

MIT’s purchase of power from this facility’s 255,000 solar panels is equivalent to 40 percent of the Institute’s current electricity use; the purchase will neutralize 100 percent of electricity consumption for both Boston Medical Center (BMC), a 496-bed academic medical center in Boston’s South End, and Post Office Square Redevelopment Corporation (POS), which manages an underground parking garage and a park in downtown Boston.

MIT has committed to buying 73 percent of the power generated by the new array, with BMC purchasing 26 percent and POS purchasing the remainder. MIT’s purchase of 44 megawatts is among the largest publicly announced purchases of solar energy by any American college or university, and the largest among academic institutions in the eastern U.S.

The partnership that enabled this project was managed by the Boston-based organization A Better City, of which MIT, BMC, and POS are all members; CustomerFirst Renewables designed, structured, and led the negotiation of the energy solution. The design, construction, and operation of Summit Farms will be handled by Dominion, a Virginia-based energy company, which will own the facility and assume responsibility for the project’s full cost — with financing made possible by the guaranteed power purchase.

The project takes the form of a 25-year power purchase agreement (PPA) between the three Boston-area institutions and Dominion. In aggregate, the expected 146 gigawatt-hours of emissions-free power per year will result in the abatement of 119,500 metric tons of carbon dioxide emissions — the equivalent of removing 25,250 cars from the road.

“It is this integrative and collaborative approach that will enable us to reach our goals,” says Israel Ruiz, MIT’s executive vice president and treasurer. “It represents our collective commitment and is a small step to solving these immense challenges together. I want to recognize the work of the entire MIT team in bringing this effort to fruition, and extend my thanks to Director of Infrastructure Operations Joe Higgins, Director of Sustainability Julie Newman, Director of Maintenance and Utilities Don Holmes, and Deputy Executive Vice President Tony Sharon for their leadership.”

The agreement to purchase energy from Summit Farms comes as MIT reaches the one-year anniversary of its Plan for Action on Climate Change. That plan included a pledge of a 32 percent reduction in the Institute’s carbon emissions from 2014 levels, to be achieved by 2030.

“Today’s agreement not only enables us to address a substantial portion of MIT’s campus carbon emissions, but it also enables us to demonstrate the feasibility of large-scale renewable-energy projects to other potential purchasers, developers, and financiers,” says Maria Zuber, MIT’s vice president for research, who is leading implementation of the Plan for Action on Climate Change. “We believe our experience can help catalyze similar investments in clean energy, which will be vital to achieving a zero-carbon global energy system within this century.”

Real-time performance data from the site will be made available to MIT researchers, along with access to some identical solar panels that will be installed on the MIT campus to compare their performance under local conditions, says Julie Newman, director of MIT’s Office of Sustainability.

Benefits in Massachusetts and North Carolina

Boston Medical Center was already on target to reduce its emissions by at least 50 percent by 2018 through a $300 million clinical campus redesign that includes upgrades to heating, cooling, and ventilation systems, a new biodigester to compost food waste, and other improvements. The additional carbon footprint reduction achieved through this renewable energy agreement is expected to make BMC carbon-neutral by the end of 2018.

“Boston Medical Center is proud to join MIT and the Post Office Square Redevelopment Corporation in this historic renewable-energy agreement,” says Robert Biggio, vice president of facilities and support services at BMC. “This purchase is equivalent to 100 percent of BMC’s projected electric consumption, making us the greenest hospital in Boston and on pace to become the first carbon-neutral hospital in New England upon the completion of our campus redesign. This is the right thing to do for the quality of life and health of our patients and our planet.”

While 41 potential renewable-energy projects were evaluated by MIT, BMC, and POS — some of which were much closer to the Boston area — this installation had a number of significant advantages: It uses a larger contiguous area than was available in the Northeast, and the local companies handling the design and installation of the solar panels have a proven track record of building and operating similar facilities, minimizing uncertainties about the facility’s cost and output.

In addition, the existing power grid in North Carolina has significantly higher greenhouse-gas emissions: More of that region’s energy comes from coal-fired plants than in New England. This means that more emissions will be displaced for a given amount of solar power than for a similar facility built in the Northeast.

“Through technology upgrades, we have reduced our energy consumption substantially in the last eight years,” says Pamela Messenger, general manager of Friends of Post Office Square. “Entering into a renewable power purchase agreement was our next step, but our consumption is too small to do it alone. It is exciting to join forces with two industry leaders, allowing us to mitigate 100 percent of our electricity footprint — a milestone we couldn’t achieve alone except at higher cost.”

Friends of Post Office Square is the developer and manager of The Garage At Post Office Square and the Norman B. Leventhal Park above it, in the heart of Boston’s financial district. The unique vision of a group of public and private civic leaders transformed an unsightly aboveground parking garage into an award-winning and inviting park, supported structurally and financially by a 1,400-space underground parking garage.

“This initiative highlights how metro Boston’s businesses and institutions are leaning forward in the face of climate change,” says Rick Dimino, president and CEO of A Better City. “Our city’s leaders are identifying, executing, and propagating innovative, cost-effective, and responsible mitigation investments.”

A Better City is a diverse group of business leaders united around a common goal: enhancing the Boston region’s economic health, competitiveness, vibrancy, sustainability, and quality of life. With 130 member companies across multiple sectors, A Better City serves as a voice of the business and institutional community on climate and energy challenges facing the Boston area. A Better City’s efforts to assemble a group of its members for this project were spurred by the Boston Green Ribbon Commission’s Renewable Energy Leadership Prize, an endeavor to promote Boston-based organizations’ pursuit of renewable energy.

“This solution shows how by acting together, organizations across industries and of vastly different size can capture the benefits of large-scale renewable energy that may have been out of reach if they had pursued renewable solutions alone,” says Gary Farha, president and CEO of CustomerFirst Renewables. “Together, we have created a roadmap for other diverse, urban institutions to access renewable energy in a way that will create change in the makeup of our country’s electrical grid. Our team was delighted to help these organizations navigate the complex waters of aggregating demand for renewable-energy procurement.”

The impact of this initial PPA on MIT’s carbon footprint is equivalent to more than half of the total emissions reductions that MIT committed to in its Plan for Action on Climate Change, announced on Oct. 21, 2015 — a 32 percent reduction from 2014 levels, to be achieved by 2030.

In addition, the Institute plans to offset an expected 10 percent demand growth from new buildings through an efficiency upgrade of its existing cogeneration plant, which currently provides 50 percent of the Institute’s power.

Together, even at the low end of these projections, these measures would yield roughly a 26 percent emissions reduction from 2014 emissions levels. Since last October, when the Plan for Action on Climate Change was announced, Zuber has emphasized that the 32 percent target is a minimum, and that MIT aims to achieve full carbon neutrality as rapidly as it feasibly can. A number of other climate-mitigation projects to help realize this goal, both on campus and beyond, are actively being studied.

“Our focus is on looking beyond the 32 percent goal,” Newman says, “recognizing that that is an interim milestone, and this agreement greatly contributes to a portfolio of reduction strategies.”

The on-site design and construction of Summit Farms will be handled by SunEnergy1 under contract to Dominion, and the power produced by the plant will be transmitted by PJM, the mid-Atlantic regional grid operator. Meanwhile, MIT, BMC, and POS will receive the benefits of a predictable fixed price for electricity and the environmental benefits of the emissions mitigation, in the form of Renewable Energy Certificates.

As the largest such project ever enabled by a group of buyers acting together, the agreement could set an example for other institutions and companies to follow, Newman says.

“This is a model where we’re thinking of solutions that are beyond the scale of the capabilities of the individual partners, but that demonstrate positive global benefits,” she says. “By banding together, the partnership enables the parties to join in on a large-scale project that they couldn’t have done individually. Many thousands of organizations around the country that are too small to initiate their own power purchase agreements could potentially follow this cooperative model.”

This agreement, as significant as it is, is just one step in the process, Newman says. “MIT is looking at all its opportunities for reduction of emissions, on campus and beyond,” she says. “The progress toward that goal represented by this one contract, within one year, is remarkable.”