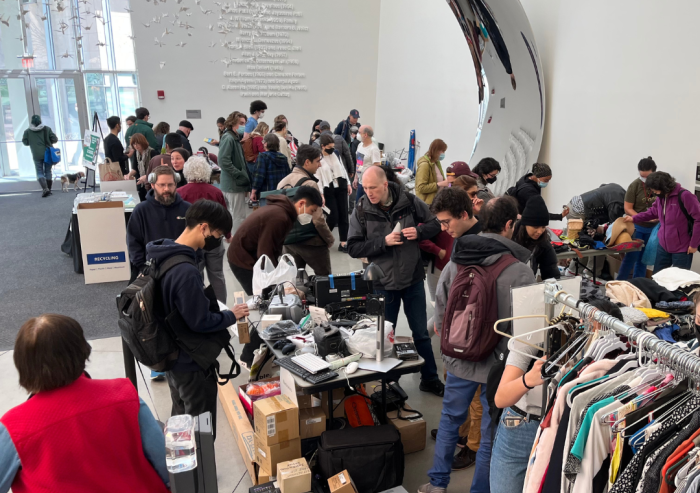 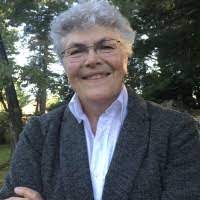 April 21st of this year was a special day for Ruth Davis, the zero waste program manager in MIT’s Department of Facilities. It was the first time since the pandemic began that Choose to Reuse—a community reuse event hosted by the Working Green Committee which she co-chairs—would be held. It would also be the last Choose to Reuse she would host, as Davis retired this summer after 33 years with MIT. The event was part of a fitting farewell to Davis who pushed for reuse and zero waste policies throughout her time at MIT. “When I first started at MIT, there was really no recycling program,” Davis recalls. “I worked hard to move things forward.”

Davis spent much of her career at MIT in communications roles—as the Publications Manager with Reference Publications and then Communications Manager in the Department of Facilities—before becoming MIT’s first zero waste program manager. Her path to the role started with volunteer opportunities and advocacy in her early days at MIT. When Davis started working with Reference Publications, the office managed a large volume of print offerings including the course catalog and phone books, many of which went unused, creating a surplus of dated materials. “The department had pallets of course catalogs just collecting in storage,” Davis remembers, noting that at the time—the late 1980s—there was no campus recycling program for such bulk items. Davis made it her mission to find one.

“Back then, nobody was recycling like that, except in Canada. So, I offered the contract for publishing the course catalog to a vendor in Canada if they would take the old course catalogs for recycling,” Davis says. The vendor agreed and Davis’s campus zero waste advocacy was born. Davis soon after began volunteering with the Working Group Recycling Committee (since renamed the Working Green Committee), the staff organization that she would go on to chair, which focused on recycling and reuse as well as more broad sustainability initiatives across campus. These efforts helped Davis transition to her role as communications manager in the Department of Facilities, where she worked to promote and support MIT’s recycling program. “I took my communication skills and training and educated the community more about recycling, trash, and food waste, and really built the program,” Davis says. When recycling spun off into its own department, Davis was tapped to lead it. At the helm of a new department and team, Davis was presented with the challenge of operationalizing recycling at MIT. “We were really one of the first places to go to single stream and that took a lot of training and education for the community,” she recalls.

These education efforts often took place through signage—an ongoing challenge to impact waste and reuse behavior. “It’s still my biggest goal,” Davis says, explaining that over the years, she has worked with the community to develop and make accessible standard signage for waste, recycling, and food waste bins across campus. Davis notes that when community members have clear messages, bins are less likely to be contaminated. Too much contamination can cause materials to be trashed instead of recycled.

Davis hasn’t been alone in these efforts to design out waste, for the past several years she’s managed students through Waste Watchers—a program where student workers act as a human point of contact at campus events and dining spaces, educating folks as they navigate waste and recycle bins around campus. “They were this volunteer group of students who took this on, and when I learned about them, I thought, ‘We need to pay them, make this consistent, and take this further,’’ Davis remembers. “So, I sort of adopted them, and they began to expand their efforts beyond events and into dorms and policy.”

Davis’s work with students also extends to the Graduate Student Council Sustainability Subcommittee where she served as an advisor, helping to bridge the efforts of the group as students cycle on and off during their time at MIT.

In addition to her work with students, Davis has long been a partner with the Office of Sustainability working on numerous projects related to designing out waste from campus. With the release of Fast Forward: MIT’s Climate Action Plan for the decade and the call for a waste related goal, those efforts have expanded. “Fast Forward envisions a future campus that includes designing out waste,” explains Assistant Director of Sustainability, Brian Goldberg. “Ruth has been a fantastic partner for helping us pilot the strategies that might help us get there.  Her operational knowledge, personal relationships, and understanding of community behavior have been critical contributions to the development of centralized waste stations, customized MIT waste signage and the growth of MIT Waste Watchers.”

Some of Davis’s final work in recycling at MIT hearkens back to that first recycling effort with the course catalogs. “In recent years I’ve expanded recycling wherever I could,” she says, noting she secured underutilized space in the recycling yard to store certain bulk items as she sought out recycling programs for them. After starting recycling programs for pallets, carpeting, and mattresses, Davis notes, “I've really tried to increase the number of materials that get recycled at MIT.”

Though recycling often gets the most attention, for Davis, it all comes back to reuse.  With in-person events like Choose to Reuse, and online platforms like Rheaply, Davis has supported the MIT community in finding second homes for items that may have otherwise gone to a landfill, working to transform the culture at MIT along the way. “Ruth has long been the go-to person for so many people for all things reuse and sustainability,” says Rebecca Fowler, Co-Chair of Working Green at MIT along with Davis and Gianna Hernandez-Figueroa. “She really helped drive reuse at MIT and her years-long efforts on the Working Green Committee have set us up to continue to make an impact and support more ways to create a sustainable MIT. Ruth and her impact will be so missed.”