3 Questions: Daniel Cohn on the benefits of high-efficiency, flexible-fuel engines for heavy-duty trucking

3 Questions: Daniel Cohn on the benefits of high-efficiency, flexible-fuel engines for heavy-duty trucking 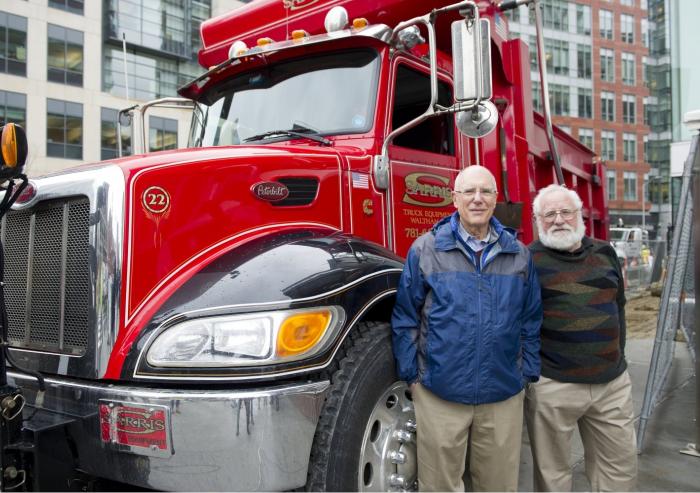 The California Air Resources Board has adopted a regulation that requires truck and engine manufacturers to reduce the nitrogen oxide (NOx) emissions from new heavy-duty trucks by 90 percent starting in 2027. NOx from heavy-duty trucks is one of the main sources of air pollution, creating smog and threatening respiratory health. This regulation requires the largest air pollution cuts in California in more than a decade. How can manufacturers achieve this aggressive goal efficiently and affordably?

Daniel Cohn, a research scientist at the MIT Energy Initiative, and Leslie Bromberg, a principal research scientist at the MIT Plasma Science and Fusion Center, have been working on a high-efficiency, gasoline-ethanol engine that is cleaner and more cost-effective than existing diesel engine technologies. Here, Cohn explains the flexible-fuel engine approach and why it may be the most realistic solution — in the near term — to help California meet its stringent vehicle emission reduction goals. The research was sponsored by the Arthur Samberg MIT Energy Innovation fund.

Q. How does your high-efficiency, flexible-fuel gasoline engine technology work?

A. Our goal is to provide an affordable solution for heavy-duty vehicle (HDV) engines to emit low levels of nitrogen oxide (NOx) emissions that would meet California’s NOx regulations, while also quick-starting gasoline-consumption reductions in a substantial fraction of the HDV fleet.

Presently, large trucks and other HDVs generally use diesel engines. The main reason for this is because of their high efficiency, which reduces fuel cost — a key factor for commercial trucks (especially long-haul trucks) because of the large number of miles that are driven. However, the NOx emissions from these diesel-powered vehicles are around 10 times greater than those from spark-ignition engines powered by gasoline or ethanol.

Spark-ignition gasoline engines are primarily used in cars and light trucks (light-duty vehicles), which employ a three-way catalyst exhaust treatment system (generally referred to as a catalytic converter) that reduces vehicle NOx emissions by at least 98 percent and at a modest cost. The use of this highly effective exhaust treatment system is enabled by the capability of spark-ignition engines to be operated at a stoichiometric air/fuel ratio (where the amount of air matches what is needed for complete combustion of the fuel).

Diesel engines do not operate with stoichiometric air/fuel ratios, making it much more difficult to reduce NOx emissions. Their state-of-the-art exhaust treatment system is much more complex and expensive than catalytic converters, and even with it, vehicles produce NOx emissions around 10 times higher than spark-ignition engine vehicles. Consequently, it is very challenging for diesel engines to further reduce their NOx emissions to meet the new California regulations.

Our approach uses spark-ignition engines that can be powered by gasoline, ethanol, or mixtures of gasoline and ethanol as a substitute for diesel engines in HDVs. Gasoline has the attractive feature of being widely available and having a comparable or lower cost than diesel fuel. In addition, presently available ethanol in the U.S. produces up to 40 percent less greenhouse gas (GHG) emissions than diesel fuel or gasoline and has a widely available distribution system.

To make gasoline- and/or ethanol-powered spark-ignition engine HDVs attractive for widespread HDV applications, we developed ways to make spark-ignition engines more efficient, so their fuel costs are more palatable to owners of heavy-duty trucks. Our approach provides diesel-like high efficiency and high power in gasoline-powered engines by using various methods to prevent engine knock (unwanted self-ignition that can damage the engine) in spark-ignition gasoline engines. This enables greater levels of turbocharging and use of higher engine compression ratios. These features provide high efficiency, comparable to that provided by diesel engines. Plus, when the engine is powered by ethanol, the required knock resistance is provided by the intrinsic high knock resistance of the fuel itself.

Q. What are the major challenges to implementing your technology in California?

A. California has always been the pioneer in air pollutant control, with states such as Washington, Oregon, and New York often following suit. As the most populous state, California has a lot of sway — it’s a trendsetter. What happens in California has an impact on the rest of the United States.

The main challenge to implementation of our technology is the argument that a better internal combustion engine technology is not needed because battery-powered HDVs — particularly long-haul trucks — can play the required role in reducing NOx and GHG emissions by 2035. We think that substantial market penetration of battery electric vehicles (BEV) in this vehicle sector will take a considerably longer time. In contrast to light-duty vehicles, there has been very little penetration of battery power into the HDV fleet, especially in long-haul trucks, which are the largest users of diesel fuel. One reason for this is that long-haul trucks using battery power face the challenge of reduced cargo capability due to substantial battery weight. Another challenge is the substantially longer charging time for BEVs compared to that of most present HDVs.

Hydrogen-powered trucks using fuel cells have also been proposed as an alternative to BEV trucks, which might limit interest in adopting improved internal combustion engines. However, hydrogen-powered trucks face the formidable challenges of producing zero GHG hydrogen at affordable cost, as well as the cost of storage and transportation of hydrogen. At present the high purity hydrogen needed for fuel cells is generally very expensive.

Q. How does your idea compare overall to battery-powered and hydrogen-powered HDVs? And how will you persuade people that it is an attractive pathway to follow?

A. Our design uses existing propulsion systems and can operate on existing liquid fuels, and for these reasons, in the near term, it will be economically attractive to the operators of long-haul trucks. In fact, it can even be a lower-cost option than diesel power because of the significantly less-expensive exhaust treatment and smaller-size engines for the same power and torque. This economic attractiveness could enable the large-scale market penetration that is needed to have a substantial impact on reducing air pollution. Alternatively, we think it could take at least 20 years longer for BEVs or hydrogen-powered vehicles to obtain the same level of market penetration.

Our approach also uses existing corn-based ethanol, which can provide a greater near-term GHG reduction benefit than battery- or hydrogen-powered long-haul trucks. While the GHG reduction from using existing ethanol would initially be in the 20 percent to 40 percent range, the scale at which the market is penetrated in the near-term could be much greater than for BEV or hydrogen-powered vehicle technology. The overall impact in reducing GHGs could be considerably greater.

Moreover, we see a migration path beyond 2030 where further reductions in GHG emissions from corn ethanol can be possible through carbon capture and sequestration of the carbon dioxide (CO2) that is produced during ethanol production. In this case, overall CO2 reductions could potentially be 80 percent or more. Technologies for producing ethanol (and methanol, another alcohol fuel) from waste at attractive costs are emerging, and can provide fuel with zero or negative GHG emissions. One pathway for providing a negative GHG impact is through finding alternatives to landfilling for waste disposal, as this method leads to potent methane GHG emissions. A negative GHG impact could also be obtained by converting biomass waste into clean fuel, since the biomass waste can be carbon neutral and CO2 from the production of the clean fuel can be captured and sequestered.

In addition, our flex-fuel engine technology may be synergistically used as range extenders in plug-in hybrid HDVs, which use limited battery capacity and obviates the cargo capability reduction and fueling disadvantages of long-haul trucks powered by battery alone.

With the growing threats from air pollution and global warming, our HDV solution is an increasingly important option for near-term reduction of air pollution and offers a faster start in reducing heavy-duty fleet GHG emissions. It also provides an attractive migration path for longer-term, larger GHG reductions from the HDV sector.