Time: 4:00 PM
The Nile basin has been embroiled in controversy ever since the late Ethiopian Prime Minister Meles Zenawi announced in February 2011 that Ethiopia would build the Grand Ethiopian Renaissance Dam (GERD), the largest hydroelectric power dam in Africa, on the Blue Nile immediately upstream of the Ethi 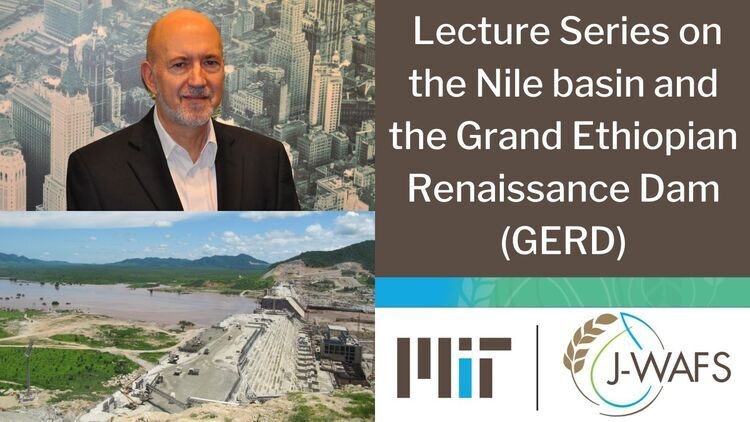 The Nile basin has been embroiled in controversy ever since the late Ethiopian Prime Minister Meles Zenawi announced in February 2011 that Ethiopia would build the Grand Ethiopian Renaissance Dam (GERD), the largest hydroelectric power dam in Africa, on the Blue Nile immediately upstream of the Ethiopian-Sudanese border. Ethiopia, Sudan, and Egypt have still not agreed on arrangements for completing the filling and subsequent operation of the GERD.

This three-part lecture series on the GERD, hosted by MIT’s Abdul Latif Jameel Water and Food Systems Lab (J-WAFS), will be given by J-WAFS visiting scholar, professor Dale Whittington, Departments of Environmental Sciences & Engineering and City & Regional Planning, University of North Carolina at Chapel Hill. The lectures will explore the current controversy over the GERD; different ethical and political assessments of the project from the perspective of Ethiopia, Sudan, and Egypt; hydropower potential; irrigation withdrawals; and more. See below for details.

All lectures will be held from 4:00-5:00 p.m. ET, and light refreshments will be served starting at 3:45 p.m. The first lecture will take place in the J-WAFS conference room, E38-346. The locations for the second and third lectures are TBD.  Guests may choose to attend all lectures, or individual ones.

Click here to register for the lectures. Advanced registration is required.

Lecture 2 – November 16, 2022 – The Risks and Rewards of the Blue Nile Cascade
As divisive as the construction of the GERD has been, another, arguably more consequential, controversy looms over the management of Nile. For decades water planners have envisaged not one large dam on the Blue Nile in Ethiopia, but a sequence or ‘cascade’ of several dams. This lecture presents the results of a river simulation model that includes a cascade of two additional large hydropower dams upstream of the GERD in Ethiopia. We have analyzed the hydropower potential of this reservoir cascade system and the system-wide implications for downstream riparians. As well as estimating hydropower generation, we examine scenarios in which Ethiopian irrigation withdrawals occur upstream of these dams and show the system-wide opportunity costs of such withdrawals. The analyses show how a cubic meter of water flowing downstream (adjusted for evaporation and seepage losses along the way), would generate hydropower multiple times in Ethiopia, as well as in Sudan and Egypt, before finally being used for irrigation in Egypt downstream of the High Aswan Dam. But this additional water storage upstream in Ethiopia creates new risks for the Nile riparians in terms of both filling and management of multi-year droughts. (Co-authors: Anna Murgatroyd, Kevin Wheeler, and Jim W Hall).