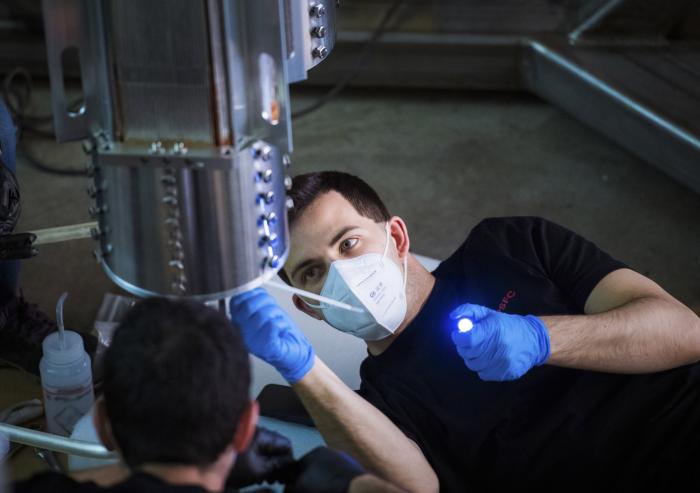 Vinny Fry had only a rudimentary understanding of fusion energy, gleaned in part from “Iron Man” films, when he made the Google search that ultimately landed him a job as mechanical engineer at MIT’s Plasma Science and Fusion Center (PSFC). An undergraduate at Duke University, where he ran their 3D printing lab, Fry was interning at SpaceX but wanting a new challenge, one he felt would have a greater impact for the future of the planet. Working late one night, he typed into the search engine: 3D Printing Nuclear Fusion.

Fry knew that fusion, which fuels the sun and other stars, is a potentially endless source of carbon-free energy on Earth. Researchers have spent decades exploring how to heat hydrogen fuel inside a doughnut-shaped “tokamak,” creating plasma that is hot and dense enough to produce fusion reactions. Because plasma follows magnetic field lines, these devices are wrapped with magnets to keep the hot fuel from damaging the chamber walls.

Fry pressed “return.” What appeared at the top of his screen was a recently published paper on MIT’s proposed ARC tokamak. The design took advantage of a novel high temperature superconducting (HTS) magnetic tape that would allow the fusion device to be reduced in size, less costly, and more efficiently built.

He did not hesitate to “cold email” PSFC Director Dennis Whyte, the MIT Hitachi America Professor of Engineering, explaining that he was about to pursue his master’s degree at Duke University, and suggesting his 3D printing skills could provide the PSFC with needed expertise in creating tokamak hardware, while providing him with a thesis topic. Whyte was happy to welcome a fledgling fusion engineer with unique talents.

Fry’s skills have evolved beyond 3D printing. Offered a job as mechanical engineer after he completed his thesis, he is now critically involved with the SPARC tokamak. A collaboration between the PSFC and MIT spinoff Commonwealth Fusion Systems (CFS), SPARC is a prototype for ARC to demonstrate net fusion energy. Fry is preparing to help test SPARC’s Toroidal Field Magnet Coil (TFMC), a scaled prototype for the HTS magnets that will surround the tokamak’s toroidal vacuum chamber to confine the plasma.

Because SPARC’s magnets will need to be cooled in order to maintain their superconducting properties during fusion experiments, the TFMC needs to be tested in this cold environment to be sure it will work effectively when scaled for SPARC. This includes the two components of the magnet Fry is overseeing: the current leads, which provide power to the magnet, and the cable bus, which connects the leads to the magnet.

“You can think of the two current leads as just like wires in a wall plug for charging your phone,” Fry explains. “One of them is the ‘positive’ and one of them is the ‘negative‘ — and they supply current to the magnet.”

To be tested, the 3-meter tall leads will be positioned vertically within a cryostat, their tops poking outside the container at room temperature, while the majority will be cooled by cryogenic fluids.

The novel design of the current leads also makes manufacturing simpler and easier to operate, but it presents some challenges. Because the superconducting magnet performance improves the colder it gets, the leads need to supply power without significantly heating up the system. Fry marvels that “while phone chargers carry about 1 amp of current and generate about 20 Watts of heating power, the current leads will  be able to supply 45,000 amps, but the heating to the magnet will be less than 20 Watts.”

A successful test of the TFMC means the designs can be “copied and pasted” into SPARC, saving valuable time, given the goal of having SPARC operational around 2025.

He expects the cable bus design will also be transferable to SPARC, which will prove valuable in designing the complete energy feed system.

The efficiency of this transferable technology is a passion for Fry. He is excited to get to the point in a design when the question becomes, “How do we produce this component in bulk?”

He asks, “How can we make it a manufacturable object if we're going to have to make 100 of these sections? You need to bring new and innovative ideas to the space that help us go a little faster.”

Fry is impressed with the freedom he has on this project to brainstorm multiple creative approaches to solving a problem.

“I think it's fun to work in a space where you can say, OK, here are some of the principles of how these things work, but you get to choose what direction you want to go to make it happen; a space where the problem statement is wide open enough that you have the room to maneuver and break some rules.”