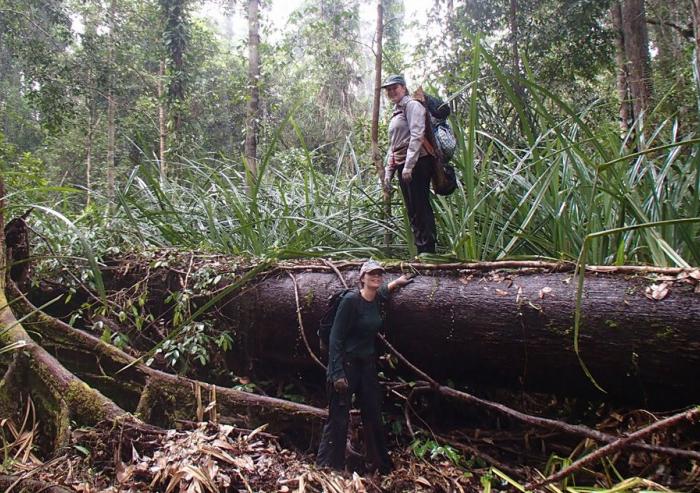 In less than three decades, most of Southeast Asia’s peatlands have been wholly or partially deforested, drained, and dried out. This has released carbon that accumulated over thousands of years from dead plant matter, and has led to rampant wildfires that spew air pollution and greenhouse gases into the atmosphere.

The startling prevalence of such rapid destruction of the peatlands, and their resulting subsidence, is revealed in a new satellite-based study conducted by researchers at MIT and in Singapore and Oregon. The research was published today in the journal Nature Geoscience, in a paper by Alison Hoyt PhD ’17, a postdoc at the Max Planck Institute for Biogeochemistry; MIT professor of civil and environmental engineering Charles Harvey; and two others.

Tropical peatlands are permanently flooded forest lands, where the debris of fallen leaves and branches is preserved by the wet environment and continues to accumulate for centuries, rather than continually decomposing as it does in dryland forests. When drained and dried, either to create plantations or to build roads or canals to extract the timber, the peat becomes highly flammable. Even when unburned it rapidly decomposes, releasing its accumulated store of carbon. This loss of stored carbon leads to subsidence, the sinking of the ground surface, in vulnerable coastal areas.

Until now, measuring the progression of this draining and drying process has required arduous treks through dense forests and wet land, and help from local people who know their way through the remote trackless swampland. There, poles are dug into the ground to provide a reference to measure the subsidence of the land over time as the peat desiccates. The process is arduous and time-consuming, and thus limited in the areas it can cover.

Now, Hoyt explains, the team was able to use precise satellite elevation data gathered over a three-year period to get detailed measurements of the degree of subsidence over an area of 2.7 million hectares mostly in Malaysia and Indonesia — more than 10 percent of the total area covered by peatlands in the Southeast Asia region. Over 90 percent of the peatland area they studied was subsiding, at an average of almost an inch a year (over 1 foot every 15 years). This subsidence poses a threat to these ecosystems, as most coastal peatlands are at or just above sea level.

“Peatlands are really unique and carbon rich environments and wetland ecosystems,” Hoyt says. While most previous attempts to quantify their destruction have focused on a few locations or types of land use, by using the satellite data, she says this work represents “the first time that we can make measurements across many different types of land uses rather than just plantations, and across millions of hectares.” This makes it possible to show just how widespread the draining and subsidence of these lands has been.

“Thirty years ago, or even 20 years ago, this land was covered with pristine rainforest with enormous trees,” Harvey says, and that was still the case even when he began doing research in the area. “In 13 years, I've seen almost all of these rainforests just removed. There's almost none at all anymore, in that short period of time.”

Because peat is composed almost entirely of organic carbon, measuring how much that land has subsided provides a direct measure of the amount of carbon that has been released into the atmosphere. Unlike other kinds of subsidence seen in drier ecosystems, which can result from compaction of soil, in this case the missing depth of peat reflects matter that has actually been decomposed and lost to the air. “It’s not just compaction. It’s actually mass loss. So measuring rates of subsidence is basically equivalent to measuring emissions of carbon dioxide,” says Harvey, who is also a principal investigator at the Singapore-MIT Alliance for Research and Technology (SMART), MIT’s research enterprise in Singapore.

Some analysts had previously thought that the draining of peatland forests to make way for palm oil plantations was the major cause of peatland loss, but the new study shows that subsidence is widespread across peatlands under a diverse set of land uses. This subsidence is driven by the drainage of tropical peatlands, mostly for  the expansion of agriculture, as well as from other causes, such as creating canals for floating timber out of the forests, and digging drainage ditches alongside roads, which can drain large surrounding areas. All of these factors, it turns out, have contributed significantly to the extreme loss of peatlands in the region.

One longstanding controversy that this new research could help to address is how long the peatland subsidence continues after the lands are drained. Plantation owners have said that this is temporary and the land quickly stabilizes, while some conservation advocates say the process continues, leaving large regions highly vulnerable to flooding as sea levels rise, since most of these lands are only slightly above sea level. The new data suggest that the rate of subsidence continues over time, though the rate does slow down.

The satellite measurements used for this study were gathered between 2007 and 2011 using a method called Interferometric Synthetic Aperture Radar (InSAR), which can detect changes in surface elevation with an accuracy of centimeters or even millimeters. Though the satellites that produced these data sets are no longer in operation, newer Japanese satellites are now gathering similar data, and the team hopes to do followup studies using some of the newer data.

“This is definitely a proof of concept on how satellite data can help us understand environmental changes happening across the whole region,” Hoyt says. That could help in monitoring regional greenhouse gas output, but could also help in implementing and monitoring local regulations on land use. “This has really exciting management implications, because it could allow us to verify management practices and track hotspots of subsidence,” she says.

While there has been little interest in the region in curbing peatland drainage in order to curb greenhouse gas emissions, the serious risk of uncontrollable fires in these dried peatlands provides a strong motivation to try to preserve and restore these ecosystems, Harvey says. “These plumes of smoke that engulf the region are a problem that everyone there recognizes.”

“This new approach ... allows peat subsidence to be easily monitored over very large spatial extents and a diversity of settings that would be impossible using other approaches,” says David Wardle, the Smithsonian Professor of Forest Ecology at Nanyang Technological University in Singapore, who was not associated with this research. “It is in my opinion an important breakthrough that moves forward our understanding of the serious environmental problems that have emerged from peat forest clearing and its conversion and degradation, and, alarmingly, highlights that the problems are worse than we thought they were.”

The research team also included Estelle Chaussard of the University of Oregon and Sandra Seppalainen ’16. The work was supported by the National Research Foundation, Singapore under its Campus for Research Excellence and Technological Enterprise (CREATE) program, the Singapore-MIT Alliance for Research and Technology (SMART), the National Science Foundation, and MIT’s Environmental Solutions Initiative.