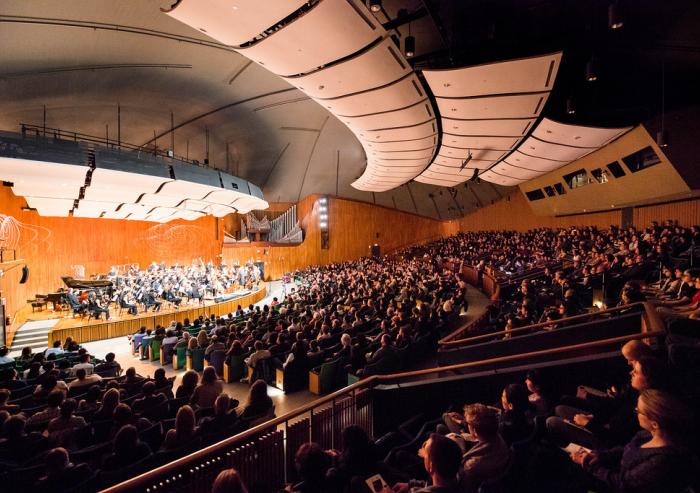 Where do art and sustainability meet? At a recent performance by the MIT Festival Jazz Ensemble, the fields melded together on stage in Kresge Auditorium with original piece, “Heal! A Battle Poem for the Climate and Its Defenders.” Created by PhD candidate Peter Godart ’15, SM ’19 for the ensemble—performed along with special guest Warren Wolf—“Heal” uses melodic tones and spoken word to communicate the urgency and perils of climate change. “It’s a rallying cry to get people to do something,” says Godart, who also devised ideas to "do something" as a PhD student in in Solving for Carbon Neutrality at MIT, a class co-taught by Director of Sustainability Julie Newman and Professor of Mechanical Engineering Tim Gutowski.

A pianist for the Jazz Ensemble since he was an undergraduate at MIT, Godart says that recent experiences compelled him to create the score that is part performance, part call to action. “I was inspired by the climate strikes, in seeing the youth who are hopeful and working hard,” he says. In addition, Godart and the Jazz Ensemble recently traveled to Puerto Rico with frequent MIT visiting artist Miguel Zenón—who composed an album in response to Hurricane Maria’s impact on the island—for a cultural and educational exchange. Godart says the trip helped to remind him of the impacts of climate change that are already here. “Seeing the effects of Hurricane Maria, and how resilient the people of Puerto Rico are, it was a reminder that climate change is real and is happening at an observable scale right now,” he says.

In his notes on the score, Godart explains that rhythmic opening beats communicate the continued passage of time as many fail to act on climate change. “’Heal!’ opens with a marimba ostinato reminiscent of the driving, resonant tick of the second hand of an antique wooden clock,” he explains. “The marimba establishes the clave that will persist throughout the rest of the piece, serving as a reminder of the unrelenting and impartial passing of time.”

Written and performed by Tiandra Ray ‘15, the spoken word portion of the score opens to challenge the forces that have led to climate change and inaction. “Our relentless stampede towards wealth and comfort has cracked open our Earth,” she says. “We cannot wait. We must do,” it goes on. By marrying the powerful message with moving music, Godart says he hopes to inspire real action on climate change. “I felt that the solution to this problem is at the intersection of art, science, and culture,” he says. “Music is better at communicating to people in ways they understand. Hopefully listening to this might stick with them a little better than having it lectured.”