In a residency supported by the Department of Energy, the MIT PhD candidate will explore the high-field side of the DIII-D tokamak.
Paul Rivenberg | Plasma Science and Fusion Center 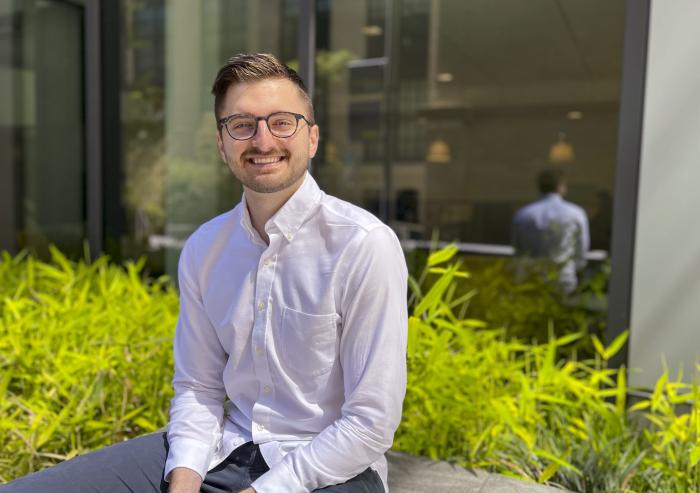 “Fusion energy was always one of those kind-of sci-fi technologies that you read about,” says nuclear science and engineering PhD candidate Evan Leppink. He’s recalling the time before fusion became a part of his daily hands-on experience at MIT’s Plasma Science and Fusion Center, where he is studying a unique way to drive current in a tokamak plasma using radiofrequency (RF) waves.

Now, an award from the U.S. Department of Energy’s (DOE) Office of Science Graduate Student Research (SCGSR) Program will support his work with a 12-month residency at the DIII-D National Fusion Facility in San Diego, California.

Like all tokamaks, DIII-D generates hot plasma inside a doughnut-shaped vacuum chamber wrapped with magnets. Because plasma will follow magnetic field lines, tokamaks are able to contain the turbulent plasma fuel as it gets hotter and denser, keeping it away from the edges of the chamber where it could damage the wall materials. A key part of the tokamak concept is that part of the magnetic field is created by electrical currents in the plasma itself, which helps to confine and stabilize the configuration. Researchers often launch high-power RF waves into tokamaks to drive that current.

Leppink will be contributing to research, led by his MIT advisor Steve Wukitch, that pursues launching RF waves in DIII-D using a unique compact antenna placed on the tokamak center column. Typically, antennas are placed inside the tokamak on the outer edge of the doughnut, farthest from the central hole (or column), primarily because access and installation are easier there. This is known as the “low-field side,” because the magnetic field is lower there than at the central column, the “high-field side.” This MIT-led experiment, for the first time, will mount an antenna on the high-field side. There is some theoretical evidence that placing the wave launcher there could improve power penetration and current drive efficiency. And because the plasma environment is less harsh on this side, the antenna will survive longer, a factor important for any future power-producing tokamak.

Leppink’s work on DIII-D focuses specifically on measuring the density of plasmas generated in the tokamak, for which he developed a “reflectometer.” This small antenna launches microwaves into the plasma, which reflect back to the antenna to be measured. The time that it takes for these microwaves to traverse the plasma provides information about the plasma density, allowing researchers to build up detailed density profiles, data critical for injecting RF power into the plasma.

“Research shows that when we try to inject these waves into the plasma to drive the current, they can lose power as they travel through the edge region of the tokamak, and can even have problems entering the core of the plasma, where we would most like to direct them,” says Leppink. “My diagnostic will measure that edge region on the high-field side near the launcher in great detail, which provides us a way to directly verify calculations or compare actual results with simulation results.”

Although focused on his own research, Leppink has excelled at priming other students for success in their studies and research. In 2021 he received the NSE Outstanding Teaching Assistant and Mentorship Award.

“The highlights of TA’ing for me were the times when I could watch students go from struggling with a difficult topic to fully understanding it, often with just a nudge in the right direction and then allowing them to follow their own intuition the rest of the way,” he says.

The right direction for Leppink points toward San Diego and RF current drive experiments on DIII-D. He is grateful for the support from the SCGSR, a program created to prepare graduate students like him for science, technology, engineering, or mathematics careers important to the DOE Office of Science mission. It provides graduate thesis research opportunities through extended residency at DOE national laboratories. He has already made several trips to DIII-D, in part to install his reflectometer, and has been impressed with the size of the operation.

“It takes a little while to kind of compartmentalize everything and say, ‘OK, well, here's my part of the machine. This is what I'm doing.’ It can definitely be overwhelming at times. But I'm blessed to be able to work on what has been the workhorse tokamak of the United States for the past few decades.”