MIT has a number of small-scale, on-site renewal energy systems on its Cambridge campus. On campus today, there are five rooftop solar photovoltaic (PV) systems. Together, these systems are designed to produce an estimated 80,000 kilowatt hours (kWh) of clean energy annually.

In 2002, the Massachusetts Renewable Energy Trust (now the Massachusetts Clean Energy Center) awarded MIT a grant to fund three solar photovoltaic systems on campus totaling 20 kilowatts of electrical generation capacity. The three rooftop systems are on buildings W20, E52, and 14. MIT Department of Facilities was the program manager for the project, in collaboration with MIT’s Laboratory for Energy and Environment (now the MIT Energy Initiative).

In 2007, in response to the Great Dome exterior re-lighting project, a 40 kilowatt capacity solar panel system was added to counterbalance the electricity needed for lighting the Dome. This system produces an estimated 50,000 kWh of clean energy annually. Located on the roof of the Alumni Pool, these panels comprise the biggest single PV system on campus. In 2011, a fifth solar PV system was installed on campus at the Sloan School of Business building, E62.

A 2015 study by MIT students conducted an assessment of new roof-top solar PV system potential and identified several possible promising locations that are under consideration as part of a comprehensive roof assessment program.

In 2021, Fast Forward: MIT's Climate Action Plan for the Decade called for the increased the capacity of renewable (primarily solar) energy installations on campus by a minimum of 400% (from 100kw to 500kw) by 2026. 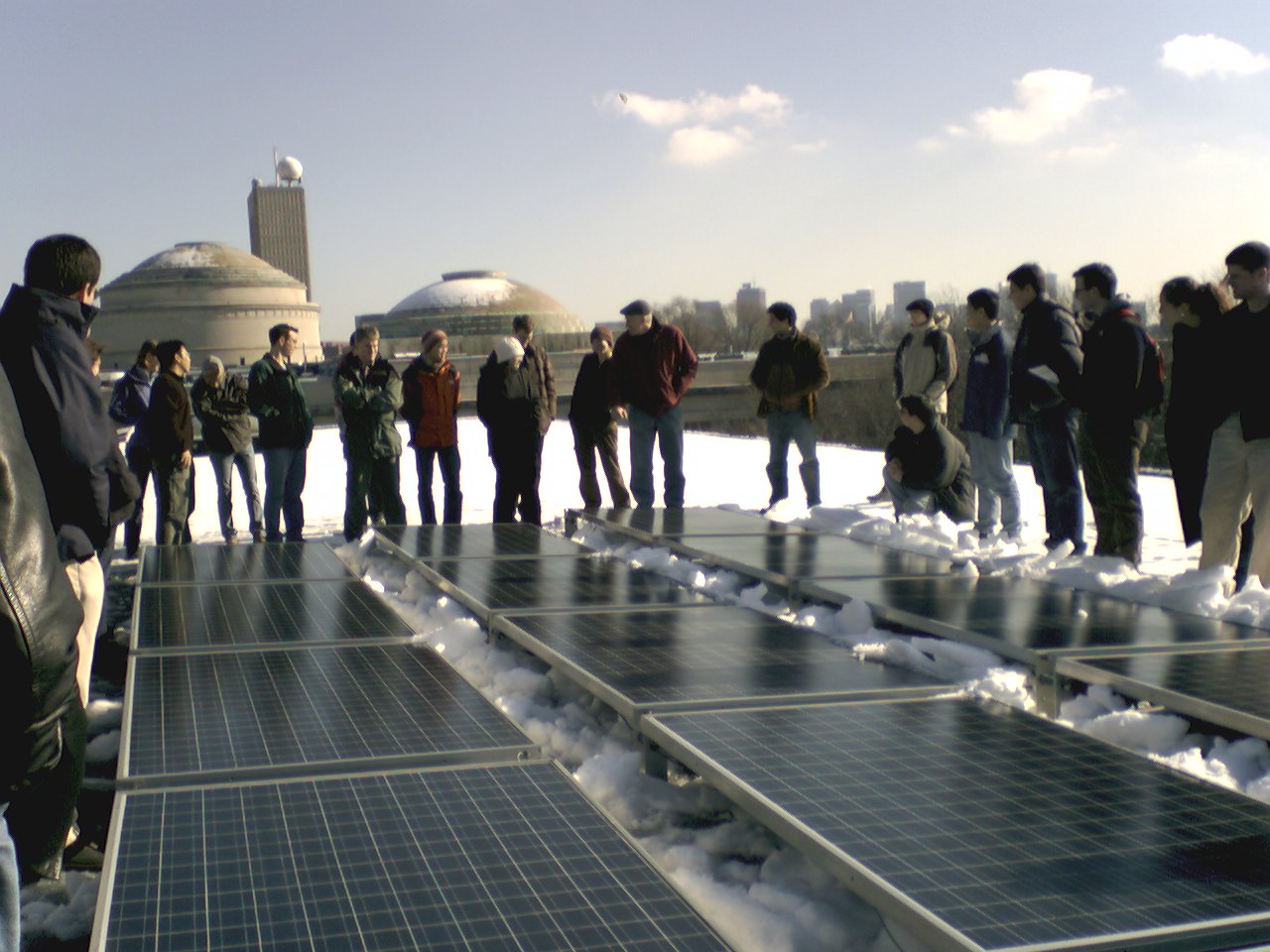 In November 2015, the MIT Bates Research and Engineering Center, a multi-purpose laboratory facility, announced that a 10kW wind turbine was up and running at the site. From 2010 to 2013, student researchers from MIT Wind Energy Projects in Action (WEPA) studied the wind potential of the Bates Center’s site in Middleton, MA. Using an onsite meteorological tower, the students collected data over the three-year period to verify the performance of wind energy generation and examine the feasibility of a turbine at the location. In December 2011, they presented a preliminary report to MIT Department of Facilities and Bates Center staff.

The turbine was constructed by Keystone Tower Systems of Somerville, MA backed by a grant from the Massachusetts Clean Energy Center, with the Bates Center as a project participant. Keystone’s founder and CEO, Eric Smith, holds graduate degrees from MIT and has taught wind turbine engineering in the Department of Mechanical Engineering at MIT.

The Bates Center supports Keystone’s advanced automated tower manufacturing process, which is able to simultaneously perform all of the rolling and welding operations needed to produce tubular steel towers, eliminating the high cost of shipping factory fabricated towers to the project site. Keystone Tower Systems and MIT Department of Facilities at the Bates Center worked as partners throughout the development process, which included many review and approval meetings with both the Middleton Town Boards and the Middleton Light Department.

“This project was certainly a challenge with all the different approvals with the town. However, it was a pleasure to work with the students and all the folks from Keystone Towers,” said Stephen P. Miscowski, Manager of Off-Site Facilities and Fleet Management in the MIT Department of Facilities, who spearheaded the project. “The completion of Wind Turbine project and seeing its blades in motion has given me great satisfaction.”

The Bates Center was established in the 1960s and is now part of the MIT Laboratory for Nuclear Science, although it is available to researchers across departments. The Center is staffed by physicists, engineers, and technicians, as well as administrative personnel, personnel from the MIT Environment, Health, and Safety office, and from the MIT Department of Facilities.

The current mission of the Bates Center is to support a variety of experimental projects being pursued by MIT researchers and their collaborators. Many of these projects are at the cutting-edge of worldwide research, particularly in the areas of nuclear and particle physics. The Bates Center also assists researchers in collaborating and forming partnerships in their respective industries.

The installation of the wind turbine was the product of a collaborative effort between students, researchers, industry, local government, and the MIT Department of Facilities at Bates Center, supporting MIT’s commitment to technical innovation, environmental protection and clean energy.